It seems my biggest fan just can not seem to understand a few things.  So let's Leigh it on the line and tell it like it is, but before I do, let's just drop this here so you all understand why I felt the need to yet again write a blog about a dog that has no teeth. 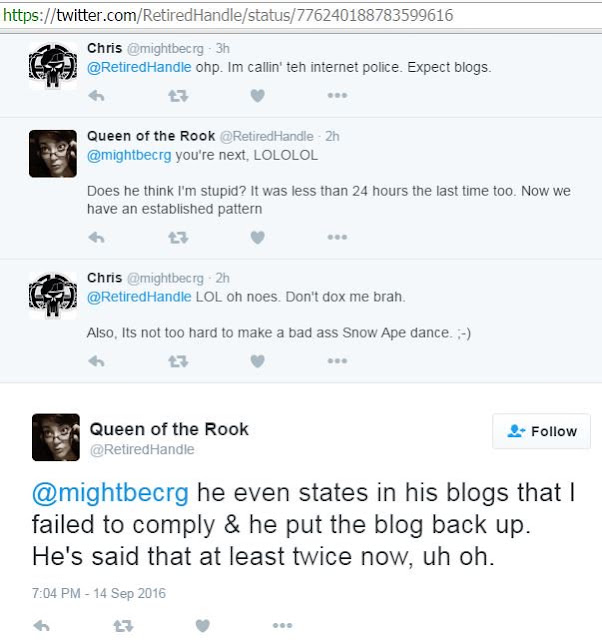 First, this blog has been up for some time, many have tried to take it down, all have failed.  There is a reason for this.  It is hard to refute and maintain allegations that I am trying to harm her when all I do is report stuff she has said or done, or what others said she has done.  It is called reporting, you know stacks, just like the "reporting" you did for Black Lives Matter.

So Leigh, feel free, continue making a fool, and each time I feel the need to report on your actions I will.  Yep call the FBI so they can laugh at you again, after all we know you are a FBI snitch.

Before I go into my rant about her, lets clear up some facts.  I never claimed that if she failed to comply I would repost the blogs, what I did say is I reserve the right to repost the blog if I feel she went back to supporting Black Lives Matter and one sided reporting.

Someone who is expecting a bit of kindness and sympathy should not run around asking for favors, yet at the same time bash the very person she is expecting a favor from.  Seems counter productive to getting what you want.

She has done, recorded, said many things that have lead her to this point in her life.  She is the one that decided to support Black Lives Matter and the degenerates that were causing so many problems for the people in Ferguson.

Let me be clear, at this point I do not give a rats ass how this is effecting her life, she chose to embrace this Terroristic organization and she was one of the primary people spreading the lies and hate of Black Lives Matter.  One should carefully examine their actions, and understand that their actions can and often do lead to consequences that they might not want.

Over time, we have collected and documented just how she has harmed the very community she claims she was helping, heck to this day it is unclear to what side she is actually on.

I also find in comical that her and her "friend" seem to think I want to DOX them, first off, No need to DOX Leigh, she is well known and she has DOXED herself time and time again.

As far as the clown that seems to fawn over her and stoke her ego, he is not worth my time or effort, he (or she) is simply yet one more small cog in a large system of corruption and criminality that seem to follow the Black Lives Matter terrorists.  I do have this comment, Snow-Apes dance for no one, to think we do is foolish mistake.

The best thing Leigh could have done was left it alone, but she keeps poking the Apes, yet the Apes know she is a toothless old dog, who can not bite.  She has very little support, she has crossed and pissed of all sides of this conflict.  I suspect she has some type of handicap that is affecting her ability to think rational.

So now, after all the dust has settled, and she was unable to profit as well as others on the Ferguson unrest, she is ready to go back to work, selling property, in the same town that she helped destroy with her narrowly painted picture of what was going on.

Leigh Maibes, you made your bed, you will now lie in it.  I guess you could go back to being a mystic?