Claims to have lived in Palestine/Jerusalem.
We found reference to him around Jerusalem, Israel June 1998

Any blog about the protesters who support violent criminals would not be complete without the information on Bassem Masri, the self proclaimed Hamas supporter, and domestic terrorist.

What is interesting is how this 'movement' backs and supports this criminal.  It tells me that this movement is nothing more then a criminal action on the peaceful people of the USA.  Anyone who supported him, anyone who provided money to him, I feel is complacent in his actions and are no better then him.

What is surprising is that with all the legal trouble his is under.  All the court dates he has, that he is allowed to leave the state, or that any other state will allow him in.

What is interesting about Bassem, is his lack of accountability for his crimes.  It is known that he has had many arrests and many convictions.  However, I will just focus on ones from the last 10 years or less.

First here is a high level view of Bassems criminal record in MO.

As you can see, he was arrested for suspicion of driving under the influence.  He refused the breath test and as a result lost his right to drive.  However, his loss of driving privileges never stopped him from driving in the future.  It also appears that this case was never fully satisfied and that his fines were not paid on this case as well.


The next record we see is from
This is a simple request to garnish his wages based on him owing a hospital money for services he had them perform.

As you can see this garnishment has been going on for a long time and has not been satisfied.  This indicates that this asshat has not had a job or means of legal employment.   With a 9% interest rate on the balance it is clear that he has no intention of paying this off.


While driving under the influence, not paying your debts could be considered as minor infractions the next one is not so cut and dry.

On 1/6/2009 Bassem is taken to court over money he owes someone from property damage. Elizabeth Yonker was the person who was wronged by Bassem.

In this case Bassem was ordered to pay a judgment of 12,650.00 as of this date not one red dime has been collected from Bassem.  I questions why he was recently allowed to pay his 15K bail, without this being addressed.  I wish the courts could have stepped in and said, you can not be bailed out until you satisfy this debt.

The next few arrest are far more current, with one of them being directly related to the protest in Ferguson.  This arrest on 10/9/2014 was due to him assaulting an officer of the law.

On this charge he is due back in court on 1/6/2015 at 9:00 AM.  Lets hope that for once they do not continue it and that they give him some time in jail on this one.  Assaulting an officer is not a minor infraction.

The last legal issue we will review is his latest driving with a revoked license. This seems to be a pattern with him, snubbing his nose at the law.

This infraction resulted in a 15,0000 Bond, that was collected by 'protesters and supporters' To me, paying this assholes bond, and knowing it will  be used to pay outstanding fines and judgments sits wrong with me.

His next court date is on 1/12/2015, lets hope that on the 6th he is already severing time and will have more time added on for this arrest.  At this point, he has at least 1 felony he is currently facing as well as a class A misdemeanor, that can lead to 1 year in jail and a 15K fine.  Somewhere somehow he needs to stop being let go and forced to serve his time.


Now, I have to questions why any of the protest leaders will allow a felon to be in the midst of this protest.  For me, it cheapens and signifies the illegal nature of what these protesters are doing.  The flagrant disobeying the law, the supporting of a known Hamas Terrorist, the support of a known and proven criminal.  To me this would seem to discount your movement and prevent anyone from taking it seriously.

I also need to add as a sides note.  Someone who keeps getting arrested, but released over and over, would you not start to think they are a spy for the police?  Lets examine some facts.

1. People are being arrested for threats to police, yet we have several documented cases of this ass making threats.  Yet he is not arrested.
2. Each time he is arrested, shortly after more criminal elements in this protest are arrested.
3. Just how does he manage to keep from being arrested at some protests where he is clearly a violent voice.

Lets talk about this post, that he deleted shortly after making it. 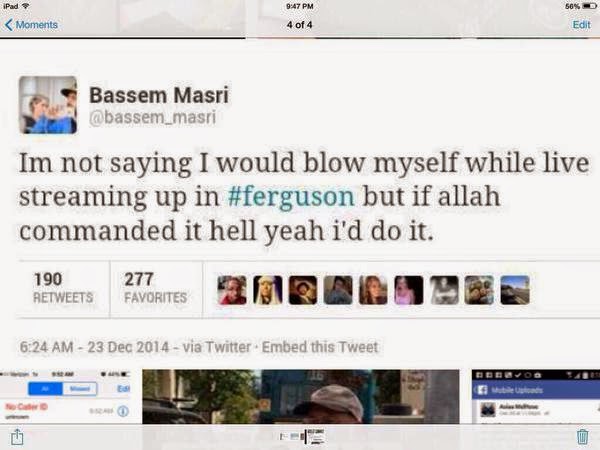 It is clear to me that this is a threat.


Sorry, this ass is working both sides.  Soon I hope to prove it.
Posted by Romonaga at 8:08 AM