This blog is not an exposure, it is to deal with a text that was sent by BLKSummer.

First, off no one actually knows for sure who Summer is, it is reported and believed that it is no other then IHAZCANDY.

Candy is well know person, who seems to be on the side of law and order.  I will not get into the details of what he does and how he does it as it is not important to this conversation.

However, if interested you can go to his donation site and learn more about him and what he does as well as why.  http://gogetfunding.com/project/cns  If you feel his cause is a good and just cause, I suggest you toss a few bucks his way.  These things do take time, energy and resources.

So you ask why are we blogging about him. 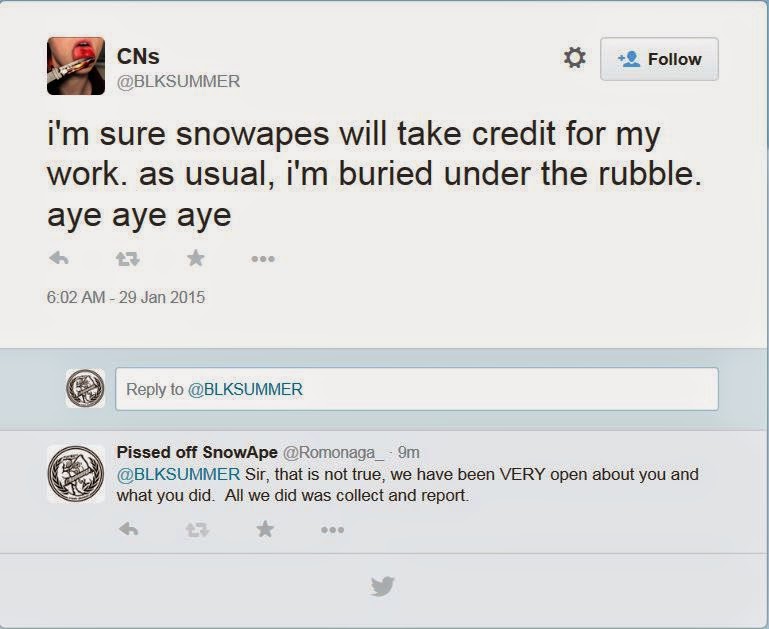 Let me make myself clear, we have lots of people collecting information, many times people do not want us to name the source.  However, we have ALWAYS been clear that many things that we blog about is from information we find, or is provided to us.  This should be clear when we present screen caps, we always include who sent the tweet.

For example. the MORE article, we were open and honest that much of information was provided to us.  However, we had to verify and present the info.  The person who worked with us on that blog did not want to be named as such we do not even hint as where we got the info.  Loose lips skink ships.

While the information was put public, and as such we did not feel we needed permission to blog on it, we did check with candy as well as we gave candy a chance to review the blog before it was released.

He made several comments, and made adjustments based on his feed back.  We even went so far as to advertise his donation site.  Something I am not completely comfortable with due to possible conflict of interest issues.

We simply do not and will not solicit funds for our work, yes there is a cost to our work, however we are self funded.

So where did we come in, again as information gatherers and reporters, we were in the middle of our own write-up on Stacks, however our angle was a different one.  It was showing her ties to Anon and her lies.  However, when the information was released about the sting Candy did to Stacks, we knew that finally the proof we have been looking for was out in the open.

To be honest, I am a bit tired, our group does not do this in the expectation of public thanks or recognition.  We do not try and steal credit for anyone's work.  If a person is willing for us to credit them as the source of the information we do so.

However, it does take work to collect the info, organize it, and present it.  Just like it took great work to get stacks to show her true colors.

So Candy, if you think we attempted to take credit for your work, sorry you feel that way.  We never did nor would we have.  In all cases I believe we made it CLEAR just who did the sting.  I also, think that this should serve as more proof that the SnowApes were not involved in the sting on stacks.

In closing, if anyone who presents info to us that is used, wants to be named as the source, please let us know.  We are more than happy to give credit where credit is due.  After all, our only desire is to see this craptastic protest stop.